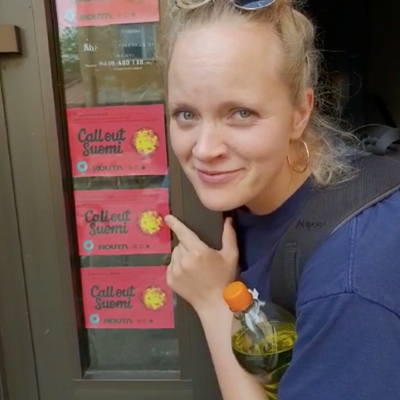 Marja has been working in the cultural industry since 2011, when she for the first time volunteered for Seinäjoki's live music association. With the move to Jyväskylä, Marja became a volunteer for Jelmu org and the studies in Media and Music Management also led to her starting to work actively in the festival field in Finland. At the same time Marja tested various dance classes in Jyväskylä and got hooked. She immediately started training several different dance styles and went to workshops and events in Finland and abroad, with house and hip hop as her favorite dance styles.

After graduating, Marja knew that she still wanted to develop herself and began studying emergency care at Oulu University of Applied Sciences. With the move to Oulu, Marja was asked to become a member of the cultural organization Keksi Kollektiivi, where she still is active. In the spring of 2018, Marja was offered to join the Call out Finland work team for Northern Finland, and she was more than happy to do so.

Now Marja is working as a cultural professional in various projects both in Oulu and elsewhere in Finland, where she produces events, teaches and learns more about dance and the cultural field.